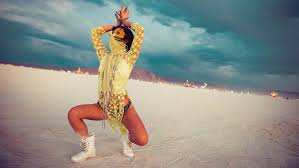 San Francisco loves theme parties.  Bay to Breakers, Gay Pride, Chiditarod (a play on the Alaskan dogsled race with shopping carts and group costumes started here in SF prior to going nationwide), the Folsom Street Fair (leather and fetishes), Santa Con (bar hopping Santa Clauses, also started in SF), World Naked Bike Ride (people don their birthday suit in protest to bike laws and cars), and the Hunky Jesus and Foxy Mary (you can use your imagination on that one), are just a few costumed-focused (or sans-clothes) events that come to mind.  It’s a city filled with the outlandish, the eccentric, the freakish, and the whimsical.  Having spent most of my adult life on the opposite coast, in Manhattan, these were events I had only heard about.  It wasn’t until this past week did I get to see some of these shenanigans unfold for myself. 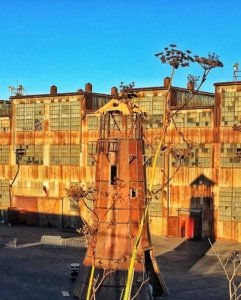 The Lighthouse and Pier 70

As I was house sitting outside the city in a town called Vallejo, I volunteered to help set-up an upcoming festival in SF (thanks to my good friend, John Miles, of Sunshine Productions and HUSH- formerly Silent Frisco- Concerts).  It was to be a sort of Burning-Man-outside-of-Burning-Man Halloween party thrown at Pier 70 (now in its 5th year).  The volunteering included helping construct completely recycled art pieces, primarily made out of cardboard. Other people were setting up installations that came directly from this year’s Burning Man.  The warehouse where we were working (and where the party was held) is massive: built out of solid steel, it stands 512 feet wide and 52 feet tall next to the San Francisco Bay.  This spot had housed battleship construction during WWII, and aside from this annual party, had been all but abandoned.  (Word has since gotten out, and Pier 70 will be turned into condos shortly, making this year’s Halloween festivities its last.)

I knew little about Burning Man, but was now surrounded by staff from Burning Man Productions.  Some of them had recently gotten back from living in the desert for a month.  Others had been out on the Playa (a term for the site of Burning Man) since March. 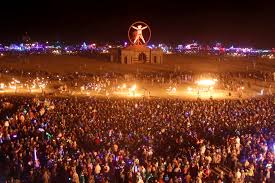 It turns out, Burning Man is an installation and performance art gathering, with the ultimate objective being freedom of expression.  And that means people can express whatever they want, as long as they’re not taking away from another person’s ‘experience’.  Naked people confidently walk amongst crowds who don a combination of futuristic and carnival costumes. People embrace one another, from hippies to serious business professionals.  Billionaires wear silver onesies and hand out grilled cheese sandwiches (like Larry Page of Google and Mark Zuckerberg of Facebook).  Giant art installations relay symbolic messages, Mutant Vehicles (or Art Cars) roam, and yes, ultimately, a large man (the man) constructed of wood, is burned.

The week-long community of 70,000 people is a sort of utopian society.  It’s filled with art and giving, peace and love, creativity, curiosity, and music.  No money trades hands (except when traded for ice and coffee), and people are encouraged to share what they can offer to others willing to accept it. 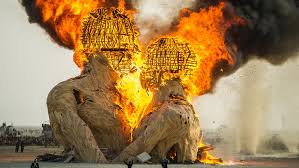 It all happens in an ancient, dried-out lakebed at 3,900 ft in the Nevada desert, 100 miles north of Reno.  This normally empty area is now called Black Rock City:  it’s a fleeting city, built up and broken down for the summer solstice.  It exists and then vanishes; no trash is left behind, and no trace of 70,000 human beings stomping the desert floor can be detected afterwards.  The settled dust of the lakebed is like baby powder, finer than dust or dirt, and it hardens into clay when wet.  Dust storms abound, daytime temps rise to 90+ degrees F, and night time temps drop into the 40’s.  A person’s PH balance becomes more alkaline and the environment brutally leaches the body of moisture.

For someone who had never been to Burning Man and didn’t know much about it, constructing a Halloween Party with the experts was fascinating.  It was like watching the filming of Alice in Wonderland while standing behind the camera crew.  I helped piece together cardboard thrones, and watched others hang an animated neon sea-life area and design a Flintstones lighthouse.  They set up tents, lights, platforms, and a hot air balloon/ship that could have been in Gulliver’s Travels.

The actual party had side acts like a cowboy riding a large and lumbering horseshoe crab made of plexiglass and steel, interactive installations, and crowds of people dancing with headphones to their own choice of music.

So that’s San Francisco for you: theme parties, extremes, and innovation.  It’s a great place to escape reality; I highly recommend giving it a try.